When an electric vehicle is running on electricity, it emits no tailpipe (also known as direct) emissions. When evaluated on that factor alone, EVs are more eco-friendly than conventional gasoline-powered vehicles on the market today.

However, when evaluating the eco-friendliness of an electric vehicle, we also need to take the well to wheel emissions into account. This is an overarching term that includes greenhouse gas and air pollutants that are emitted to produce and distribute the energy being used to power the car. Electricity production results in a varying amount of emissions depending on the resource. While “being green” in the act of driving your electric vehicle is a start, if your primary goal in purchasing an electric vehicle is to reduce your greenhouse gas and pollutants emissions, you should also prioritize using zero-emissions electricity wherever possible.

When taking well-to-wheel emissions into account, all-electric vehicles emit an average of around 2018 kg of CO2 equivalent each year. By comparison, conventional petrol cars will emit over twice as much annually. Another benefit of electric cars is that they do not emit other air pollutants such as oxides of nitrogen which are a respiratory irritant.

The chart below compares regular vehicles with hybrid and electric cars.  The second car is a Toyota Prius Hybrid (from https://www.eco-business.com/news/factcheck-how-electric-vehicles-help-to-tackle-climate-change/)

The emissions from an all electric Nissan Leaf vary in different countries (this is due to the electricity network having different emission factors – for example France and Norway sow the lowest emissions as their national electricity grids use large nuclear and hydro-electric generating stations. So where we run electric cars makes a difference to the actual emissions. 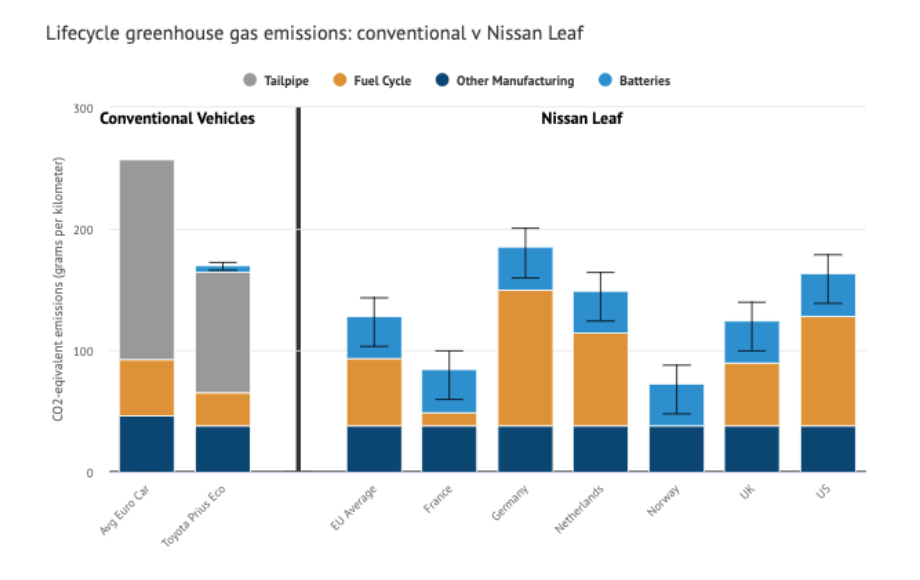 In short, where there are low national electricity grid emissions the electric vehicle produces lower emissions.

The map below shows how grid emission factors influence the total emissions of E cars versus petrol/diesel cars.  The areas in red show that the actual GHG emissions are higher than that for a fossil fueled car. A study in the USA concludes that West Virginia and Georgia in particular are locations where the GHG case for PEVs in our analysis is less strong, since the gasoline-powered Prius HEV has lower life cycle GHG emissions there than either the Leaf BEV or the Volt PHEV.  Thus we cannot say for sure that EVs are the answer to reducing mobility GHGs. 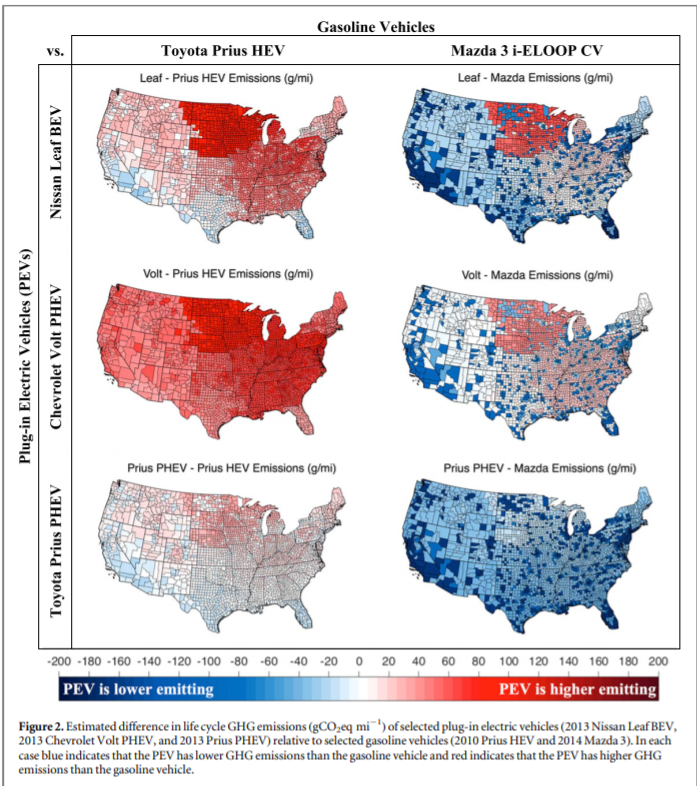 The increased use of electric cars  will also create an  increased demand for electricity to be generated (some say 20% more), which may create problems for balancing and even running the power grid especially given that peak EV charging times coincide with peak-heating demand in winter.

Business Insider Magazine reports “Yet building electric cars creates more greenhouse-gas emissions than producing an equivalent gas-powered vehicle” and the International Council on Clean Transportation have studied the life cycle impact associated with electric versus fossil fueled cars – their results are shown at the table above.

As electricity generation becomes less emissions intensive – the life cycle GHG emissions of EVs should also become less intensive.  However there is still the sustainability of battery manufacturing being questioned. – As the world scrambles to replace fossil fuels with clean energy, the environmental impact of finding all the lithium required could become a major issue in its own right.

One of the biggest environmental problems caused by our endless hunger for the latest and smartest devices is a growing mineral crisis, particularly those needed to make our batteries,” says Christina Valimaki an analyst at Elsevier.

Lithium extraction in South America uses a brine extraction process which is a relatively cheap and effective process, but it uses a lot of water – approximately 500,000 gallons per tonne of lithium.  In Chile’s Salar de Atacama, mining activities consumed 65 per cent of the region’s water. That is having a big impact on local farmers – who grow quinoa and herd llamas – in an area where some communities already have to get water driven in from elsewhere  (see here) and this report states:

“According to a report by Friends of the Earth, lithium extraction inevitably harms the soil and causes air contamination. In Argentina’s Salar de Hombre Muerto, locals claim that lithium operations have contaminated streams used by humans and livestock, and for crop irrigation. In Chile, there have been clashes between mining companies and local communities, who say that lithium mining is leaving the landscape marred by mountains of discarded salt and canals filled with contaminated water with an unnatural blue hue”

The Guardian reported. “Then there’s cobalt, another component of EV batteries. In addition to the environmental concerns related to lithium production, cobalt mining is unequivocally destructive on multiple levels. Currently, half of the world’s cobalt is produced in the Republic of Congo. Concerning cobalt mining in the Congo region, journalists have revealed human and environmental abuses ranging from child and slave labour, to toxic waste leakage and radioactivity in cobalt mines. “In 2014, according to UNICEF, about 40,000 children were working in mines across southern DRC, many of them extracting cobalt.

See here for the full article.

. . .  people living in a neighbourhood that had been transformed into an artisanal cobalt mine had much higher levels of cobalt in their urine and blood than people living in a nearby control area. The differences were most pronounced for children, in whom we also found evidence of exposure-related oxidative DNA damage. It was already known that industrial mining and processing of metals has led to severe environmental pollution in the region. This field study provides novel and robust empirical evidence that the artisanal extraction of cobalt that prevails in the DR Congo may cause toxic harm to vulnerable communities. This strengthens the conclusion that the currently existing cobalt supply chain is not sustainable.