September 25, 2019 By Valerie Foster Comments are Off

The new Radiological Protection Act 1991 (Ionising Radiation) Regulations 2019 (S.I. No. 30 of 2019), were signed into law on February 5th, 2019 and replace S.I. No 125 of 2000. The new Regulations introduce several important changes to the way in which the use of ionising radiation is regulated in Ireland. Some of the changes relate to fee arrangements, responsibilities, licencing and are particularly relevant to specialist workplaces such as hospitals and manufacturing sites. All employers, however, should be aware of the requirements in relation to radon in the workplace.

The population of Ireland is exposed to radiation from a variety of sources, both present naturally in the environment or produced artificially by man.  The biggest proportion of the exposure to radiation comes from natural sources, particularly radon.  Other natural sources include cosmic radiation from outer space, radioactivity in the food and water we eat and drink and radiation from the ground.  The beneficial use of radiation in medicine is the principal source of artificial radiation to which the people are exposed i.e. diagnostic X-rays, radiotherapy, etc.

General Changes in the Regulations

Responsibility for the protection of both public and employees from radiation will remain with the Environmental Protection Agency (EPA).  However, responsibility for patient protection will switch to the Health Information and Quality Authority (HIQA) from the Medical Exposure Radiation Unit (MERU) in the Health Service Executive (HSE).

The Regulations introduce a reduced dose limit for occupational exposure to the lens of the eye.  The new limit on the equivalent dose for the lens of the eye is 20 mSv in a single year or 100 mSv in any five consecutive years subject to a maximum dose of 50 mSv in a single year.  The EPA will issue some guidance in the future in relation to acceptable measurement protocols for the measurement of eye dose.

The new Regulations set out a more defined role for Radiation Protection Officers (RPO).  The RPO must be an individual or unit reporting directly to the undertaking with operational responsibility for radiation protection.  The new Regulations replace the current requirement to appoint a Radiation Protection Adviser (RPA) with a requirement to consult with an RPA in specified situations.

The new Regulation no longer permit the deliberate dilution of radioactive materials for the purpose of them being released from regulatory control.  The mixing of materials that takes place in normal operations, where radioactivity is not a consideration, is not subject to this prohibition.

Radon is a radioactive gas which is produced in the ground from the uranium present in small quantities in all rocks and soils. You cannot smell, see or taste radon but it constitutes the greatest health risk from radiation in Ireland.  It accounts for 56% of the total radiation dose received by the Irish population.  Approximately 300 cases of lung cancer in Ireland every year can be linked to radon. Modern building standards address radon with engineering controls, so older buildings should generally be of greater concern. However, the only sure way of knowing whether a particular building is at risk is to have it tested.

These new Regulations require all employers in high radon areas to test their workplaces for the cancer causing, radioactive gas radon. Where levels are above the new lower national reference level of 300 Becquerel/m3 (previously 400 Becquerel/m3) employers are required to carry out work to reduce these levels.  Regulation 66, 2(b)) reinforces the requirement for employers, whose workplaces are in known areas of high risk of exposure to radon, to carry out measurement as a formal part of the risk assessment. Areas of high risk are indicated in the EPA radon map which can be found on their website (see Figure 1 and available at: https://www.epa.ie/radiation/radonmap/).

It has always been a duty of employers under the 2005 Act, to identify hazards in the workplace and carry out a risk assessment, and the HSA always had the expectation that measurement would be undertaken in high risk areas. (Note however only those workplaces or work areas with an occupancy of above 100 hours per year need be measured).

Employers will need to review their property portfolio against the EPA Radon map of the country and initiate a programme of testing of premises in high risk areas.  Other factors may reduce the risk to employees significantly even if radon present such as how long persons are in the potentially exposed areas, but, if thresholds are exceeded, then remedial works/engineering controls must be put in place at the very least. Following the review of known high risk areas a review of other premises where the nature of the building may raise the exposure risk should be conducted i.e. where people work in basement levels. 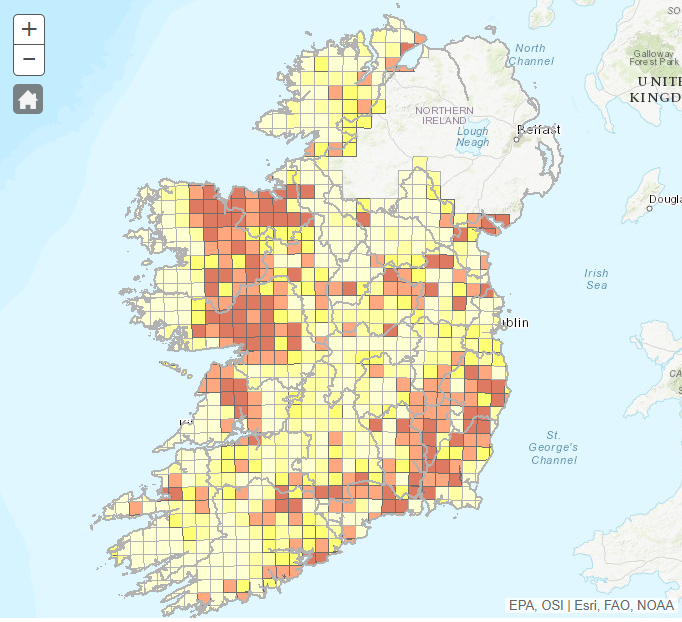 If you require more information or have any questions about the Ionising Radiation Regulations, please do not hesitate to contact us or fill out the below enquiry form.