Injuries Board Warns Against Cutting Corners On Workplace Safety

October 30, 2013 By John Hargaden Comments are Off 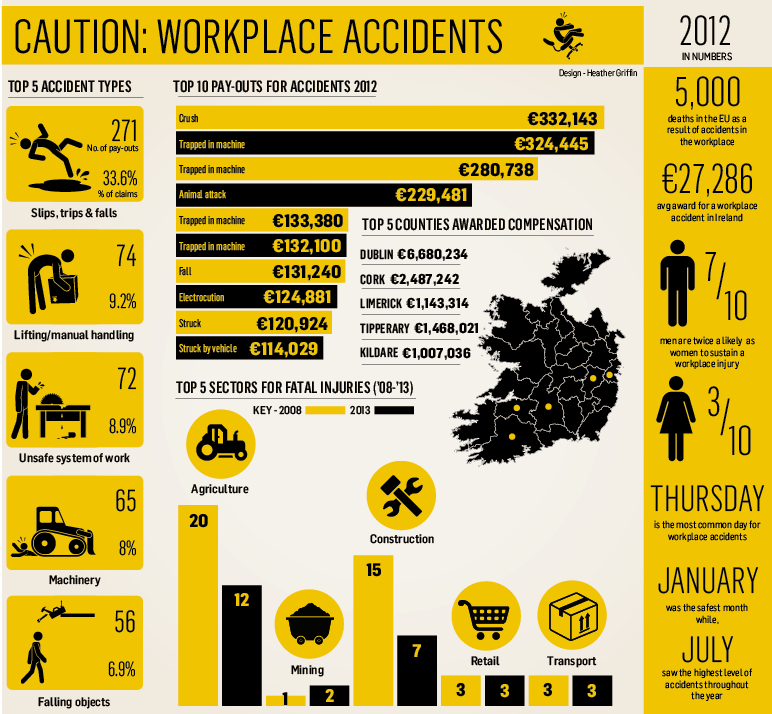 Thursday is the most likely day of the week for workplace accidents, according to an analysis of workplace claims in 2012 released by the Injuries Board to mark 2013 European Week for Safety and Health at Work.

Releasing the figures, the Board cautioned employers against cutting corners on workplace safety and highlighted that two of the highest ten awards for workplace accidents last year related to fatalities.

Key statistics from the Injuries Board analysis of employer liability awards in 2012 are as follows:
• The average award for a workplace accident was €27,286. The average award for men was slightly higher at €27,657, while women received an average award of €26,456.
• Men are twice as likely as women to sustain a workplace injury with men accounting for 7 in 10 awards (69.1%) and 54% of the labour force, while women accounted for the remaining 3 in 10 (30.9%) awards and represent 46% of the labour force*.
• The majority of awards were to workers in the 25 to 34 age group (32.2%) while over 1 in 5 (22.6%) were in the 35 to 44 age bracket.
• The vast majority of awards (82.6%) were under €38,000.
• For the second consecutive year, Thursday was the most common day for workplace accidents while the least number of accidents occurred on Sunday.
• Slips, trips and falls were the most common accident type accounting for one third (33.6%) of all awards for workplace accidents.
• January was the safest month while July saw the highest level of accidents throughout the year.
• Dublin, Cork and Limerick were the counties with the highest number of awards, whereas Leitrim, Roscommon and Laois had the lowest.
Patricia Byron, CEO of the Injuries Board, urged employers not to cut corners on workplace health and safety and stressed that it can be the difference between life and death in some cases. “Over the past three years we have experienced a decline in the number of awards for accidents in the workplace but the reality is that this decline is in line with reduced numbers in employment so workplace safety is still firmly on the agenda. The cost to business is not just the €22m awarded in compensation or the number of working days lost due to accidents in the workplace, there is also the human cost and the unnecessary pain and suffering workers endure as a result of a workplace injury.”

“Again and again the Board receives claims for a range of similar and preventable accidents such as severed limbs as a result of defective machinery, burns and scalds, or slips, trips and falls. It is apt that the focus of this years’ European workplace safety week is risk prevention but prevention can only be achieved by employers leading the way on risk management through robust health and safety initiatives. Employees also need to play their part through awareness of workplace safety procedures, whether that’s in an office, on a shop floor or indeed a production line”, continued Ms. Byron.
According to Martin O’Halloran, Chief Executive of the Health and Safety Authority, “Effective management of workplace safety and health not only protects workers from injury and ill-health, but also has the potential to save businesses thousands of euro. Proper management of workplace safety and health contributes to long-term commercial success and profitability. I would urge all business owners and directors to take some time this week to consider the safety systems they have in place and make sure not to leave anything to chance”.